The music for this video was recorded at a kitchen table off grid in Hamakua on a dropped D guitar tuning. I took the photos from the beautiful water side in Kapoho, East Hawaii.

In the background of the recording you can hear the cacaphony of coquis (frogs) that have premeated the quiet nights in most of East Hawaii in recent years except at higher altitudes and dry desert areas.

Coquis here on the Big Island are a good example of how balance can be thrown to the wind on a random unconscious result of “nothing intended”. Yet a lot still happens. Isn’t that the way?

Coquis were brought to Hawaii as stowaways on container ships from Puerto Rico. While having been controlled (and removed) on other islands of Hawaii, their foothold on the Big Island was never seriously challenged and so they thrived. As a result many residents live with earplugs as a way to sleep. As many as 10,000+ coquis can exist per acre with a chirp (koh-KEE!!) in the 80 to 90 decibel range, similar to a lawnmower. They have no preditor here…yet.

“Something He Already Knows” has similar implications in its message about things we know but can’t or won’t do anything about. Like the tide we watch our emotions and images of our own reality move in random fashion as if it was something external from us and not tied directly to our existence and imagination.

We are what we imagine. Something we already know. But how well do we live with that in our mental conversation with ourselves and our world? 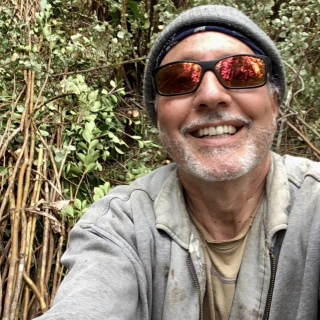 Acoustic music, Ultra high quality hi-res audio recordings including DSD and MQA, nature, photos, poetry, video, the nature of art, the art of nature, the art of listening...more at www.davidelias.com

the emergence of a hapu’u fern in the Hawaiian rainforest